Dan (58 years old) is a hedonist, and he loves a good glass of vine and a nice dinner with friends and family. For more than 10 years, Dan has been heavyset and has had high cholesterol and elevated blood pressure. Six months ago, he was diagnosed with diabetes 2. He is being treated with cholesterol-, blood pressure-, and blood sugar lowering drugs. He suffers from severe side effects from his medication, an uncomfortable feeling in his stomach, general muscle pain and feels tired. Dan wants to know if there are alternative drugs that might be better for him.

Dan´s doctor has several drugs to choose from, but Dan is concerned because his brother developed severe muscle pain and weakness when taking certain statins. His brother went through a long series of prescriptions, blood tests and appointments before the right drug was found.

Dan decides to take a pharmacogenetic test offered to him through his healthcare insurance service. The test shows intermediate activity of SLCO1B1, meaning that there is a risk of higher concentrations of statins in the blood, leading to a higher risk of side effects. Dan and his doctor change to a statin drug  with a low risk of side effects.

Most medications exhibit an inter-individual variability in their efficacy. A considerable part of this variability is due to inherited gene variations.

The Personal Medicine Profile can be used to select which medical treatment will benefit the patient.

Do not change or stop your medication without consulting your doctor.

PMP is a once only investment. Use it when new medicine is prescribed.

We take good care of your personal data according to GDPR (EU) with our Security by Design set-up.

Get your Personal Medicine Profile here

Statins are a cornerstone of the treatment and prevention of atherosclerotic cardiovascular disease and among the most prescribed medications. However, adverse drug reactions may result in significant cost and can lead to nonadherence and discontinuation of therapy. Statin-associated muscle symptoms constitute the most commonly reported adverse effect. 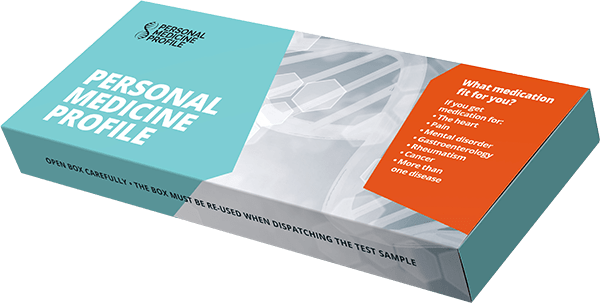 Get your Personal Medicine Profile

Purchase a PMP from selected pharmacies or online (below)

When analysis is ready, you will get a notice.

Share your analysis with your doctor or your pharmacy.

We are all different

The practice of medicine has always been about treating each person as an individual patient. For a long time, clinicians have observed that patients with the same diagnosis may respond differently to the same medical treatment.

Advances in technology have made it possible to identify genetic variations determining the effectiveness of commonly prescribed medications.

We promise to keep your personal and genetic information confidential. Here’s what we do:

Your biological sample is destroyed after quality control. We do not sell it or hand it over to third parties.

Throughout our processes we handle your sample anonymously. Only authorized personnel have access to your sample.

Get your own Medicine Profile now

Genetelligence focus on services, research and development in the field of personalized medicine. Therefore, we work with a wide range of private and public institutions. Please, feel free to contact us for possible cooperation.